In this paper, a Reddit dataset annotated by trained experts is presented, alongside a hierarchical taxonomy of misogyny found online. The entries in the dataset take context into account, following conversation threads. They also annotate the specific span of the text that includes misogynistic content.

Labeling took place on three levels. First is a binary class (misogynistic and non-misogynistic), then granularity is added within each class, while finally labels such as “threatening language” are applied. For misogynistic content, the following labels are presented:

Annotators were involved in the development of the definitions’ hierarchy, and during the annotation phase, weekly meetings were held where annotation disagreements were hashed out with an expert PhD researcher as the intermediary. These meetings took place until a consensus was reached. For the binary task (first level), inter-annotator agreement was 0.48 both for Fleiss’ Kappa and Krippendorf’s Alpha, which is higher or at least on par with the other mentioned work. Kappa values for the granular misogynistic labels (level two) can be seen in the following table (as seen on the paper). 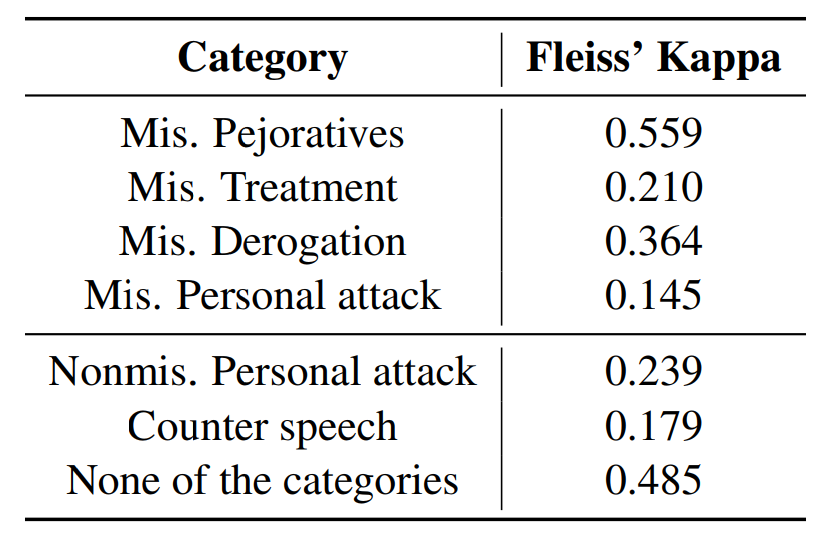 As for the distribution of classes, 10\% are misogynistic, with the most prevalent subclasses being pejoratives and derogation (both at 4\%).

In their experiments, model performance was overall quite low. The best examined model is BERT with class weighting (to account for the low percentage of positive examples). This model scores a precision score of 0.38, while recall is at 0.5, F1 at 0.43 and accuracy at 89\%. In their error analysis, the authors found a lot of false positives. Mentions of women, even if they are not misogynistic, get classified as misogynistic.